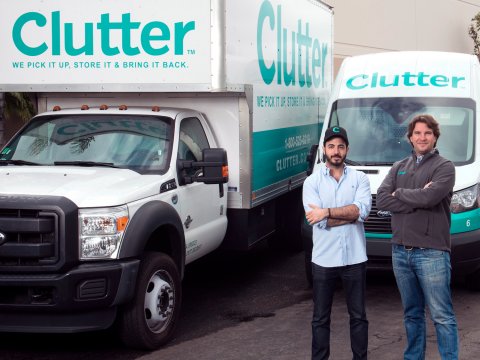 A recent wave of on-demand storage fever has struck the startup scene in Silicon Valley. Clutter, the premiere on-demand storage facility, is leading the way. “This is going to be the sleeper winner of the on-demand economy” Clutter cofounder and CMO, Ari Mir, recently told Business Insider. Clutter seeks to revolutionize and tap into an already 30 billion dollar storage market. Mir has proven to be quite the CMO, convincing the world and top VCs that on-demand storage is a safe bet in a volatile and unpredictable startup market. He has raised 100 million in funding to date.

Clutter has made storage cheap and convenient through their at-home or at-office pickup — as well as their efficient cataloguing and storing of consumer’s possessions in warehouses located in far flung areas outside of big cities where space is cheaper. A novel idea. Maybe a little too novel.

People don’t just start a storage facility company out in the middle of nowhere if they don’t have something to hide, if they don’t have skeletons in their closet. Where are the skeletons Mr. Mir? Storage facilities have always been located in densely populated urban areas. Why change the face of the storage industry now, Mr. Mir? Is it because the stench of the bodies was getting a little too pungent? One can only wonder why Clutter has been so popular with the mob … a fact I just made up right now.

With Clutter becoming a trusted name in Silicon Valley and a popular option amongst consumers looking for a storage company that will deliver an individual item to them with the push of a button in an app, it’ll be harder and harder to get to the bottom of what, or who (formerly), inspired Mr. Mir’s genius idea. But I’m on to you Mr. Mir, I’ll be keeping my eye on you. Also, how do I purchase renter’s insurance? It’s not letting me do it through the app.