It’s a tall order to find someone under 30 who hasn’t heard of Dan Bilzerian. The wealthy G.I. Joe-inspired playboy can be found just about anywhere. Whether it be Twitter, Facebook or Instagram, the man is an internet sensation: a bearded James Bond with less morals and a desire to entertain the average male with explosions and babes. His latest Instagram upload finds him sitting down in a leather chair as a topless woman hovers over him funneling grapes into his mouth.  While his ridiculous antics that toe the line between a good time and a downright amoral decision have earned him a healthy following, people often wonder whether his image will be any more memorable than those countless myspace celebrities of the early 2000s.

While Bilzerian may be regarded as an icon in the same social circles that worshipped writer Tucker Max (I Hope They Serve Beer in Hell) and similar authors/low-rent celebrities in the fratire genre of entertainment, (for those unfamiliar with the term, ‘fratire’ refers to a budding genre of humor that places an emphasis on jokes that would be classified as  politically incorrect and/or hyper masculine–even chauvinistic in character) the viability of his image has been challenged. The legitimacy of his estate (he has gone on record stating he is worth $100 million) has been called into question on multiple occasions. Specifically, the numbers reported on how much he makes as a professional poker player. Bilzerian’s facade (for the most part) has been engineered around his profile as a high-stakes card shark.

What seems to be conveniently left out of the preliminary summary of Bilzerian is his family’s history with ethically questionable business endeavors. His father, Paul Bilzerian, has been indicted on tax law violations and failed attempts at business takeovers that has forced him to do a prison sentence as well make substantial payouts as part of multiple settlements. The question then becomes even more simple: is Bilzerian a self-made man? Or are one of his father’s alleged offshore accounts taking care of both Bilzerian and his brother for the foreseeable future? While that particular aspect of the Bilzerian family’s wealth is left mostly to conjecture, there’s no denying the power of the rumor mill to sway public perception.

While Bilzerian is undoubtedly a successful entertainer that has used social media to his advantage, his attempt to step up in the world of show business ended abruptly when Bilzerian sued the producers of the 2013 film, Lone Survivor after investing $1 million into the project on the condition that he would have at least eight minutes of screen time and 80 words of dialogue. His screen time was cut down substantially. Ultimately, the lawsuit was dropped because 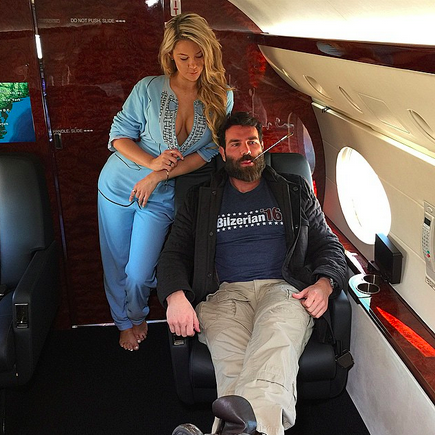 Bilzerian ended up making $1.5 million due to the success of the film.

While Bilzerian may have already built quite the rap sheet, his antics continue—most recently, a T-shirt that reads ‘Bilzerian16’ advertises his intentions to enter the presidential race. While this garnered a collective eye-roll from most audiences, a recent Instagram upload features Bilzerian playing a game of poker with legitimate presidential candidate Rand Paul.

While at times, it seems like Dan Bilzerian might just be a figment of his own imagination, it’s obvious that the man is no slouch as far as marketing goes. In less than six months his brand has gone completely viral—and love him or hate him, his crass, careless and sometimes lurid behavior is what’s admired (or at least recognized) by countless men in every major college town from coast to coast.

So what do you think of this candidate? Tweet about it with us @StarterNoise using hashtag #Bilzerian16