If you’ve ever wondered what your BAC (Blood Alcohol Content) is after a beer, a glass of wine, or maybe one of those fishbowl-sized mixed drinks that are staples of beach bars everywhere, you might want to bring a DrinkMate with you the next time you go out. DrinkMate founder Shaun Masavage explains of the world’s smallest breathalyzer, “It’s an entertainment device that has a side effect of safety”.

The breathalyzer is powered by the user’s phone and readings can be synced and recorded with the DrinkMate app, which logs location and time and graphs readings according to BAC levels. 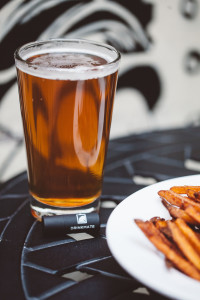 DrinkMate for Android was released in 2014 after a Kickstarter campaign with a goal of $40,000 brought in more than $100,000. This July, DrinkMate launched a KickStarter to develop an iOS compatible device and app, which reached its funding goal in four days.

Masavage says the DrinkMate breathalyzer is priced to be an impulse buy, the response from Kickstarter validated interest from an unconventional market.

“It’s a tricky market. It’s not the biggest market, like a cell phone, where you can say you’re marketing it to everyone. It’s marketed to people who a) drink alcohol b) are interested in controlling themselves, and c) are interested in gadgets and cool devices. Kickstarter let us quantify those numbers.”

Masavage holds a degree in Mechanical Engineering from the University of Virginia, which has been beneficial when confronting the unique set of challenges that come with developing a hardware startup, he explains.

“A major factor in our success is that I understand the technology behind our product, so when anybody in our team has a question, I can actively participate in coming up with a solution. It’s critical. If I was just another business degree, saying ‘why isn’t this ready, what’s this delay for? ’ and not being able to understand it, it would create a stressful environment.”

The team at DrinkMate is now working to get the product on retail shelves before the 2015 holiday season.

When developing a hardware device, delays are an unavoidable part of the process.

Masavage continues, “With hardware, you will encounter delays and scheduling challenges that you can’t even foresee. For us, we manufacture in China, and on Chinese holidays, everything shuts down. Nothing gets made, nothing gets shipped, nothing happens. Scheduling is very important. On Kickstarter, up to 80% of hardware products get delivered late.”

One of the biggest surprises the team at DrinkMate has confronted is the complex task of building hardware that is compliant with the iPhone. Apple doesn’t offer support to third parties, their approach is essentially ‘If you can figure us out, you’re in the club’, Masavage explains.

“Right now, we are focused on getting the iPhone version successfully manufactured and accepted by Apple. The good thing about Apple is that although they do have all of these rules, in the end if you abide by all of them, you’re good to go.”

“So many of the things we’ve faced just don’t have answers out there on the internet. When you can’t talk to people about your problems, you have to really think outside of the box and be confident in yourself and your ability to learn new things as you go along.”

Would you use the DrinkMate app and gadget? What other innovations would be entertaining while keeping people safe? Talk to us @StarterNoise