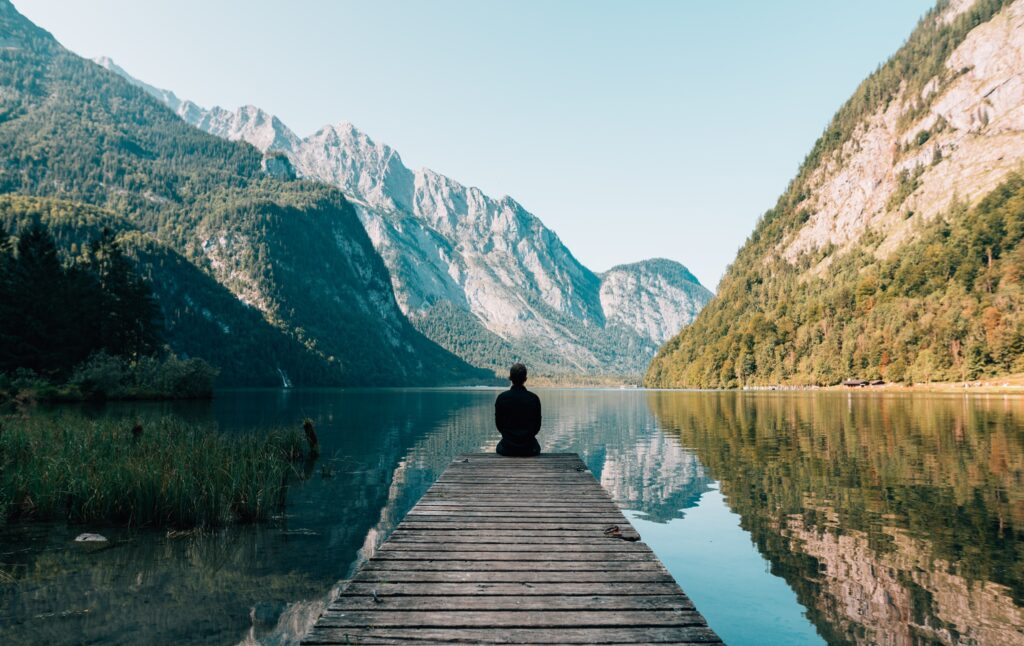 Our interview with Joel Gruber, founder of New Gods, was electrifying.  To put it simply, this was the most eye opening, honest, and raw conversations we have yet to have with a founder.  I can positively say that something from this article will resonate with you or open your mind to thinking in a new way.

Who is Joel Gruber?

Joel is a former professor at the University of San Diego where he translated Buddhist teachings into digestible information for students to understand.  After being fired for teaching students meditation, Joel founded New Gods, a program that sets the foundation for liberation and embodied awakening.  Joel has taught at the world renowned, holistic educational center Esalen Institute, has a PhD  in Buddhist studies, has extensive experience in scientific research , lived in India for 3 years, and this is a modest introduction of Joel.

From an American University Classroom

During Joel’s time as a professor at the University of San Diego he shared, “I noticed that there are so many millennials who have enough money, they have a job, they have everything, but they are miserable.  They are medicated and many of them hated themselves, which is a weird thing to say, but it’s true.  But the thing is, they are all really good people. So, I began asking myself- what are the views that are harming my students?”

Guided to help his students, Joel began breaking down the views that were potentially harming them.  Most commonly, he recognized that they defined themselves as a consumer, as a worker.  They had trouble understanding who they were outside of this identity.  Further, they occupied a materialist belief that if you buy enough, you’ll be happy.

Without any reference to Buddhism Joel began translating Buddhism in a way his students would be able to absorb.  Marrying these translations with the sciences, humanities, and popular culture, Joel created a course that was geared in helping his students transcend their limiting beliefs of consumerism and materialism.  One that would guide them to uncover a much purer identity.

“Say you go on a five-day retreat, it is so easy to feel enlightened.  Everything is so beautiful there.  But when you go home and you see your husband whom you repeatedly feel anger towards, you fall right back into that repetitive cycle of anger.”

New Gods is broken down into a 30-day program that begins with identifying the limiting narratives, self-doubt, and deluded thought patterns we all face each day. Over 30-days, one of the practices highlighted is using empirically-validated mental imagery.  Guiding you to forge new neural pathways, you then begin opening your mind to a space where you are able to break free from patterns and engage new possibilities.  When we unplug our minds from our old beliefs, our ego begins to dissipate, and we let go of old suffering, welcoming an awakened self.

Over each New Gods course, you are guided to create a map of your mind.  The practice of  mind mapping allows you to see your behavior patterns, harmful repetitive thoughts, and ultimately uncover the way in which your mind is causing your suffering.  Through this process you will find you have created a personalized blueprint for overcoming self-inflicted suffering, including anxiety, depression, and addiction.

“We come back to the question, how do I define myself?  It is a question that nobody is really taught how to answer.  So you write this down answers and at the end of each day you review it.  We begin breaking these mental patterns where we have hardwired our brain to do the same thing over and over,” explained Joel.

“New Gods wrote me, it actually saved my life first,” shared Joel.  New Gods provokes existential crises, and provides the tools and support to redefine who you are in a way that is more faithful to your awakened nature.  This opens people’s eyes and helps them understand that they have been defining themselves based on an advertisement.  They are living a life that has been designed by other people who don’t even know them.  They aren’t doing things that actually interest them.

Breaking mental patterns, diving into meditation, and committing to the work that New Gods require can get very uncomfortable. Joel explained, “some people get so uncomfortable and they want to quit.  But you must put in the hard work to benefit from the program.  I am so straightforward that if someone isn’t putting in the work, I will kick them out and refund them, simply because they are affecting the group as a whole.”

Community has become essential to New Gods and is one of the most important aspects. Joel shares, “when we show up for someone to support them, we somehow can transcend self-imposed limitations and we can make the necessary changes to our mind.  The reason people don’t change is because it can get super uncomfortable. It can feel like physical discomfort.”

By following guided meditations that work with mental imagery and visualization, you begin to learn how to control your mental images, what you project, learn to shape your day, change your repetitive behaviors, and beyond. (Video on mental imagery from Joel).  Your whole body becomes involved, when you have an image or a thought, your body will react accordingly.  When images come up, instead of rejecting or avoiding them, begin to investigate them with a calm mind.  Something that we viewed as scary becomes less and less scary when we see the bits and pieces to it.

“This sounds corny as hell, but after 20 years I have come to understand that the truth is corny, and that all we need is love,” shared Joel.

When we unplug our mind from our beliefs, we get to know the mind and body.  We actually get to love ourselves.  Love manifests in a lot of stages, loving ourselves doesn’t mean being vegan and acting nice, it means being more in touch with ourselves so we can love ourselves, offer forgiveness and acceptance to both ourselves and others.  Joel expressed that the strength of the program is in the community, the love that catapults everyone to achieve self transcendence and open themselves to love.

Not only does New Gods have the power to heal and transform lives, it has the capacity to create an incredible community and open up your mind to a much more beautiful world.  Escape the programmed version of yourself and tap into a much more awakened self.  If you are ready to take a deep dive into yourself or know a loved one who would certainly benefit, most definitely check out the links below.  Let us know how this conversation opened your mind @StarterNoise.

Enroll in the thirty day program here.  Joel has generously included a $300 discount code,”starternoise30″ making the total cost of $400.  Run, don’t walk, the next openings are in June and July.

Enroll in the 5-day program, beginning March 24th here.  Discount code “staternoise” for a $75 discount, for a total cost of $75.

Morgan is a student at the University of San Diego majoring in Business Administration and minoring in Entrepreneurship. Not afraid to run a 10k or test out a new product for review, Morgan is our go-to for all things spirituality, health, wellness, and the hottest spots to check out in Denver and San Diego. Also a podcast junkie, Morgan can always recommend a killer listen ranging from the newest data on MDMA research to ways we can begin understanding the microbiome.