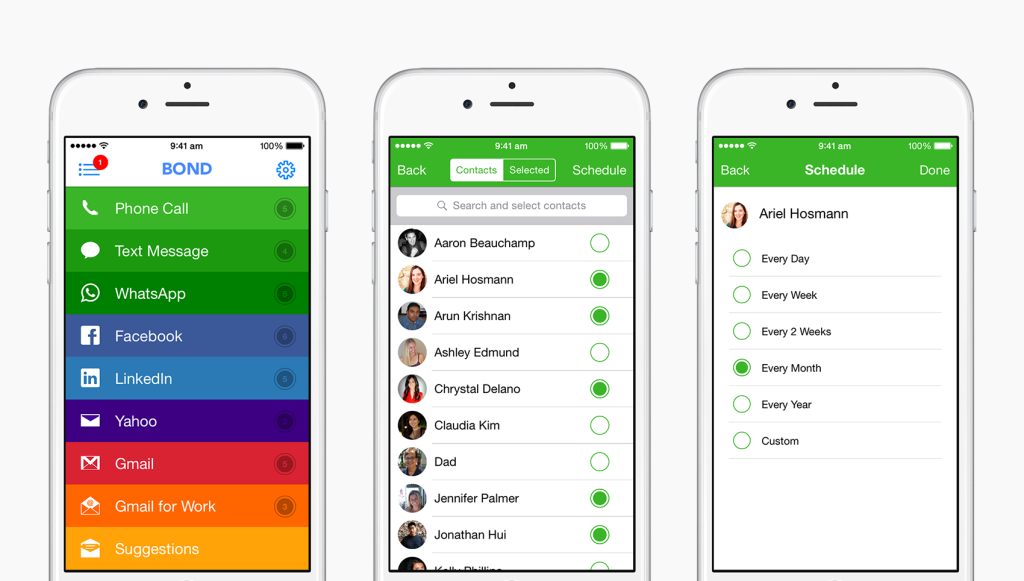 The pace of life today enables people to make more connections than ever before, but maintaining those connections is another story. Bond founder Manan Rokani knows this struggle all too well.

”I’ve been in a few different places and everywhere I’ve gone, I’ve met really good people and made really great friends. What I realized was as soon as I moved cities or switched jobs, it became difficult to keep in touch with people. ”

The idea for Bond emerged when Rokani, struck by all the well wishes from friends and family on his 30th birthday, pledged to make a change.

Rokani made reminders for over 70 people, though it was too easy to ignore these as well.

”The reminders would come in, but I wasn’t taking action. So, I tried looking for other apps to let me do this better, but there was nothing out there. So if there’s nothing out there, I’m just going to build something on my own.”

Building Bond
To confirm he wasn’t the only one suffering from bad communication habits, Rokani made a survey and sent it out to 50 people in his network.

”Most of them responded back and the results were positive. We meet so many people over the years, but it becomes difficult to keep in touch on a regular basis.”

Users were overwhelmingly positive about the need for a better mechanism to keep in touch with people. With validation that it was indeed a problem that needed solving, the team sought to reach a larger audience.

By June 2014, the team was ready to release the first version of the app.

”We spent eight weeks developing the app, eight weeks polishing it, then we put it on app store and sent it out to those people we initially surveyed. We wanted to build the first version quickly and put it out so we could test it with an audience and see how it was working. ”

Rokani was following the website ProductHunt, and on a whim sent an email to submit his app for consideration. He soon received news that Bond was trending on the site’s homepage. Rokani recalls,

”This was at like six in the morning, I was barely awake, I jumped out of bed and got on the site. And we were trending at number one! It was exciting, but nerve-wracking at the same time. Overall it was a great day, but it was totally unexpected. ”

He admits ProductHunt was a much needed breakthrough for Rokani and his team.

”The day before ProductHunt happened, I was totally down and out. We weren’t getting press traction, it was really frustrating and I was almost ready to give up. The next day, we were trending on producthunt. I feel like that was the defining moment for us.”

Reaching number one on ProductHunt had a real impact on Bond.

”From there, the word started spreading. We got a ton of traffic, with lots of downloads in the first couple of days, and things started going up from there.”

Building Bond
Rokani’s approach is informed by hard lessons learned in previous ventures. His first startup, Fill the Bill, was a social networking website to connect nonprofits organizations in india with volunteers and donors. Though there was initial traction, Rokani realized he couldn’t sustain the project.

”The lesson learned was start small, validate the idea quickly, and once you find an audience who needs your product, then you build on top of that.”

Those experiences translated into a particular approach with Bond.

“This time around, we built the first version quickly in six weeks, put it out there and gave it to people to start using and they gave us feedback. I could have built all the services in the first version, without even knowing if people would use it.”

With a strong foundation, the team is working to develop Bond, with plans to expand and enhance the app’s features and functionality.

”We’re working on the android version of the app, we are in closed beta right now and testing with a few hundred users. There’s a lot more we want to do, like making the scheduling algorithm a lot smarter, building more features to improve engagement, we’re also trying to figure out our monetization plan, and integrate with other services.”