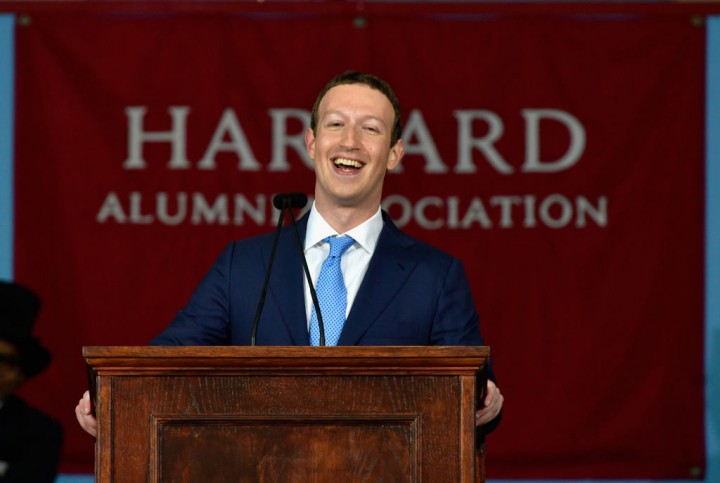 What do all parents want from their kids? For them to grow up educated, graduate from college, and settle down with a family, right? Well if that’s the case, then Mark Zuckerberg is a huge fucking let down. Mark Zuckerberg dropped out of Harvard during his sophomore year to pursue his ‘website’ idea called ‘Facebook.’

Imagine how goddamn disappointed his parents were when their son couldn’t make it through even half of his college career before dropping out like millions of other lowlife Americans do every year. They cursed the day he was born. And even when he ended up a millionaire, and eventually a billionaire, there was still a hole left in their rich little hearts because their son was still, above all else, a college drop out. That kind of weight on a parent’s shoulder can tear apart a family.

So Mark did what any good son would do: be insanely rich. And guess what!? It worked! Just last week, despite dropping out of college in 2004, Harvard awarded Zuckerberg an honorary Doctor of Laws degree. Mark Zuckerberg is the Billy Madison of Harvard. All he had to do was show up to school again for a day, and boom! College Grad! Talk about making your parents proud, and all it took was creating an unequivocal fortune through designing one of the most used websites on earth.

Take careful notes disappointing kids, because Mark just gave his own master class in going from zero to hero in your parent’s eyes. And the proof is in the pudding, because just minutes after being awarded his degree, he was asked to make the Harvard commencement speech that very same day! What a coincidence. Harvard really lucked out on that one, booking one of their most successful graduates to speak at their commencement on the very same day he graduated. The odds of that are like a billion to one. What if he graduated a week later? What would have Harvard done?

Mark Zuckerberg successfully went from being a huge disgusting disappointment to being a college graduate and commencement speaker in a matter of hours! Once again Mark Zuckerberg has pushed the envelope on what is possible if you have an endless supply of US currency. Way to go, Mark! We’re all so proud!