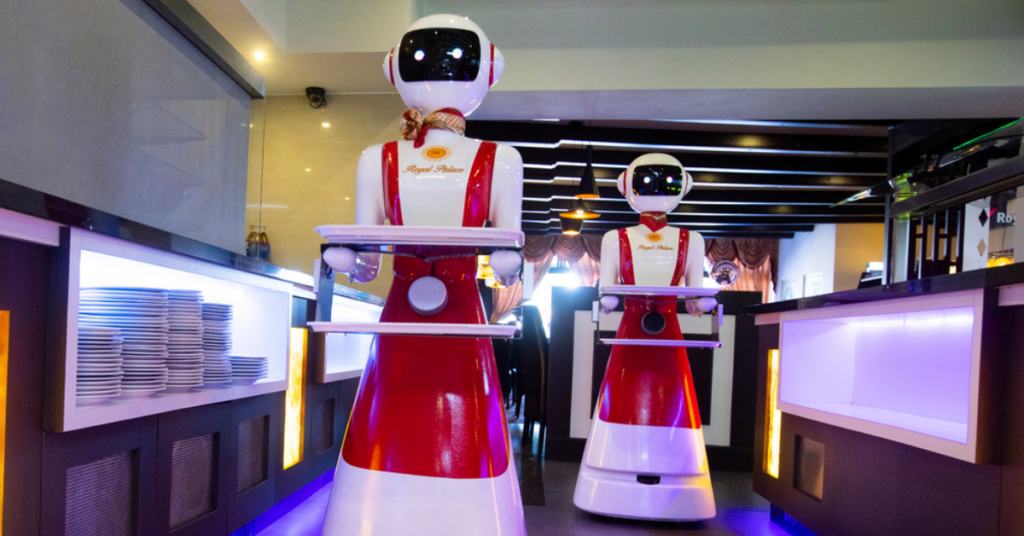 Robots are serving up food at a restaurant in the Netherlands. Social distancing was kicked up a notch and it feels… weird.

2020 is formally introducing robot waiters that say “hello” and “welcome” and “we’ll see you in your nightmares tonight.” Well, they haven’t been programmed to say that last bit yet, but sources (me) say it’s just a matter of time.

It’s been a rough few months for the restaurant industry, with restaurants reportedly losing about 5.5 million jobs in April alone.

Many restaurants were closed for months during the pandemic, and, while some are beginning to reopen, there are limits on the number of guests allowed in each restaurant.

So, a restaurant in the Netherlands found a workaround- simply limit the number of humans in each restaurant. The restaurant introduced new robot waiters as a way to reduce human-to-human contact in the midst of the coronavirus pandemic.

The robots will be tasked with greeting customers, serving drinks and dishes, and returning used glasses and crockery. The robots will also be ensuring that social distancing rules are upheld. “We will use them to make sure the 1.5 meters (5 feet) we need during the corona crisis sticks,” says Leah Hu, daughter of restaurant owner Shaosong Hu.

There have been some negative reactions, Hu notes, “such as saying it makes it impersonal.” But Hu argues that it frees up the human staff for more personal contact. “They help us with the work we do,” said Leah Hu. “We are often busy and cleaning tables and the robots give us an extra hand.”

As for complaints about the robots robbing others of jobs, the Hu family doesn’t want to hear it, saying that finding staff in a rural region without any major city close by is hard enough already.

There’s a high price tag to bringing on a robot staff, so you likely won’t be seeing any red-and-white robots wearing chiffon scarves (which I guess is trending in the robot fashion industry?) in restaurants in the U.S. anytime soon.

But the concept of robot servers isn’t entirely new, as robot servers have been common in restaurants in China for many years. So don’t rule out dining with droids in the future.

Stay in the loop with us here at StarterNoise and follow us on Twitter to be the first to hear about tech, startup, and wellness news.