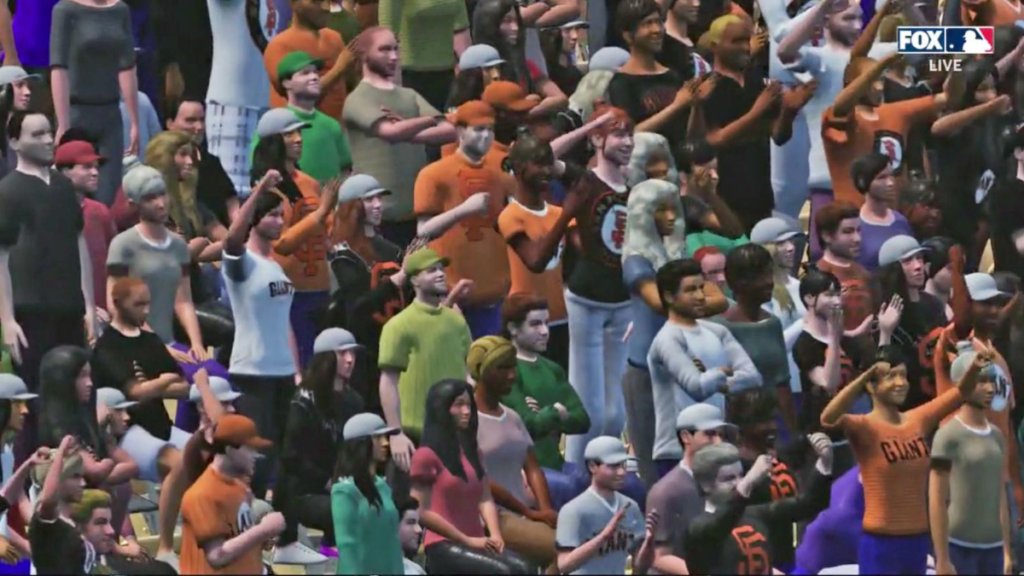 Virtual fans are here and it feels… weird.

After a COVID-19-imposed hiatus, baseball season is back. Baseball fans, however? Not so much.

The pandemic has caused many changes in baseball. Instead of 162 games, this season will be 60 games, and there are new rules (spitting is prohibited, which will, unfortunately, take away from the aesthetic I so enjoy). And most notably, ballparks that were once packed with fans, vendors, and people that went to your high school that you haven’t thought about in years and want to avoid interacting with, are now empty.

Remember the unsettling movements, behavior, and overall appearance of Sims? Let me formally introduce you to the virtual fans of Fox Sports. “No fans? Not on Fox Sports,” reads the tweet announcing the new feature.

“We believe that what we’re doing is creating a natural viewing experience,” Fox Sports executive VP Brad Zager told the Washington Post. “Sports is supposed to be an escape and when people have that escape we want it to feel as normal as possible when there’s very little normalcy, like a crowd at a baseball game on a Saturday.”

Describing the software to The Verge, Chaim Gartenberg says:

“The augmented reality software used to insert the crowds is called Pixotope, which has worked on AR graphics for things like the Super Bowl and The Weather Channel’s terrifying storm warning demonstrations.

It works by leveraging graphics (created by creative agency Silver Spoon Animation) built in Epic’s Unreal Engine. Unreal Engine is used here for the same reason it’s popular for creating video games for crafting virtual on-set backgrounds for shows like The Mandalorian. Unlike most film graphics, which have to be rendered in post-production after the fact, Unreal can render in real-time, making it far more suited for live television.”

I’ll be honest. I’ve never really been a baseball fan. So virtual fans or not, this will affect me in no way. But while all of you baseball fans watch are watching the games, I will be having a very real, in-person tailgate with my dog.

And I’m doing that because of the pandemic and certainly not because it’s how I usually spend my weekends way before the pandemic started.